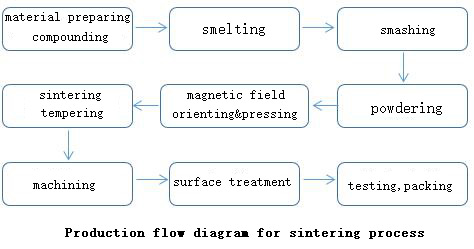 Casting is the process of melting a solid metal into a liquid and pouring it into a mold of a particular shape to be solidified and formed. For permanent magnets, the casting process is mainly used to produce cast Al-Ni-Co magnets. Compared with sintered AlNiCo magnets, cast AlNiCo magnets have higher magnetic properties and can be processed into different sizes and shapes. The process of sintered Al-Ni-Co is simple, the tolerance of blank size is small, and the machinability is good.  The schematic diagram of the production process is shown in figure-2

The Bonding process of permanent magnets

The bonding process is a production process for the preparation of composite permanent magnetic material by compacting, extrusion and injection molding by mixing the powder of permanent magnetic material with a certain magnetic property with the adhesive and other additives in a certain proportion. Compared with sintered permanent magnets and cast permanent magnets, bonded permanent magnets have the advantages of high dimensional accuracy, no deformation and no need for secondary processing;Products of various shapes, such as strip, flake, tubular, annular or other complex shapes, depending on the actual use of the product; Easy to automate production in large quantities;And the mechanical strength of the product is high. Its shortcoming is that the magnetic property is low and the use temperature is not high. The key technologies in the process of bonding are the preparation of magnetic powder, the selection of coupling agent and adhesive, the amount of binder, the pressure of molding and the intensity of orientation magnetic field, etc. The manufacturing methods of magnetic powder used for bonding NdFeB include melt rapid quenching, HDDR, mechanical alloying and gas spraying. Among them, HDDR method is popular at present. The production flow diagram of the bonding process is shown in figure-3. 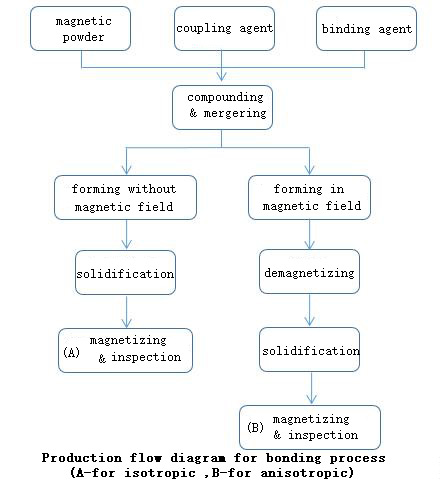