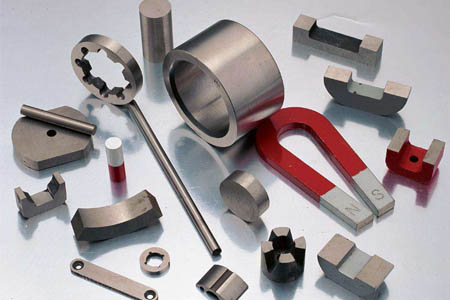 Disadvantages: very low coercive force,easy to be demagnetized, magnetic circuit design can not use thin disc magnets, and must be assemblied first then overall magnetized

AlNiCo magnet is the earliest developed permanent magnetic material, it is an alloy of Al, Ni, Co, Fe and another rare metal element. AlNiCo permanent magnets birthed in 30 years of 20 Century, its magnetic property is best in the years, so it was most widely used in permanent magnetic motors. But that application in motors was replaced step by step when ferrite permanent magnets and rare earth magnets produced. And the proportion of AlNiCo application for motors went down. For AlNiCo magnets, the ability of corrosion resistant is good, surface treatment is not needed for it. It usually made into cylinder AlNiCo magnets or block AlNiCo magnets. The advantages of AlNiCo magnets are high remanence (maximum up to 1.35T) and low-temperature coefficient(-0.02%/℃), maximum working temperature is around 520℃, the magnetic properties change caused by temperature change is very small. The disadvantages of AlNiCo are low coercivity (normally lower than 160KA/m), and the demagnetize curve is not linear, it is easy to be magnetized and also easy to be demagnetized.

Excellent Customer Service
Take advantage of our network and see
what Meank can do for you.
Related Ferrite Pot Magnets